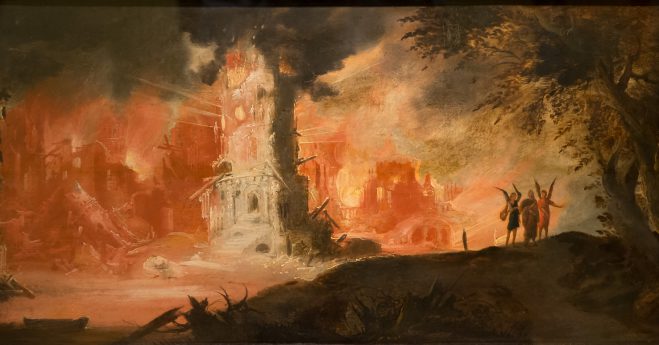 God is just. He is righteous. He always does what is right. He always performs justice. And he wants us to know it.

One of the ways God performs justice is by punishing sin. And one of the most famous demonstrations of this kind of justice is the destruction of Sodom and Gomorrah (Gen. 19). The outcry against these cities had come to God’s ears, so he sent two of his angels to “investigate.” They learned by firsthand experience that their wickedness was, in fact, very great. Instead of welcoming these strangers (as Abraham did in Genesis 18 and then Lot in Genesis 19), the men of Sodom attempted to rape them.

So the Lord rained sulfur and fire from heaven upon Sodom and Gomorrah and destroyed the entire valley. It was a powerful display of God’s wrath, and God was completely justified in doing so.

17 The Lord said, “Shall I hide from Abraham what I am about to do, 18 seeing that Abraham shall surely become a great and mighty nation, and all the nations of the earth shall be blessed in him? 19 For I have chosen him, that he may command his children and his household after him to keep the way of the Lord by doing righteousness and justice, so that the Lord may bring to Abraham what he has promised him.” (Gen. 18:17-19)

According to God’s promise, Abraham would become a great and mighty nation. All the nations of the earth would be blessed in him, particularly through his offspring, Jesus Christ, who would come as the redeemer of the world. All of this came about because of God’s promise. Nothing Abraham would do, and nothing the nation of Israel would do could change this. Salvation would come to the world through his offspring, Jesus Christ.

But Abraham also had a responsibility concerning this promise: to “command his children and his household after him to keep the way of the Lord by doing righteousness and justice.” God wanted Abraham to know about his wrath, because Abraham would soon become the father and teacher of a nation. The vocation of parent includes teaching one’s children the way of the Lord. For Abraham, this included teaching his descendants about Sodom and Gomorrah.

In most circumstances it is advantageous for parents to allow all of their children to witness the discipline of one. It is also advantageous for a government to allow an entire nation to know about the punishment of a criminal. This teaches us about justice and punishment without having to experience it firsthand. This is why God told Abraham what he was about to do. And this is why it is recorded for us in the Scriptures. God does not want us to experience his wrath.

In our sinfulness we want to use God’s judgment of others to elevate ourselves. We think, See; those other people suffered God’s wrath. I must be better than they are. But that is not why God shows us his wrath. We are allowed to see it as a warning. “Unless you repent, you will all likewise perish” (Luke 13:3, 5). God shows us his wrath so that we might be spared from it.

God does not desire for any person to suffer his wrath. This is why he bore it himself in the person of his Son. The primary way God performed justice was by punishing all sin in the body of Jesus Christ. He revealed his wrath in this way so that we might look to Christ and be saved. Do not look to yourself and how you are better than Sodom. You’re not. Look to Christ. See the warning of Sodom and Gomorrah, but look to Christ for your salvation.