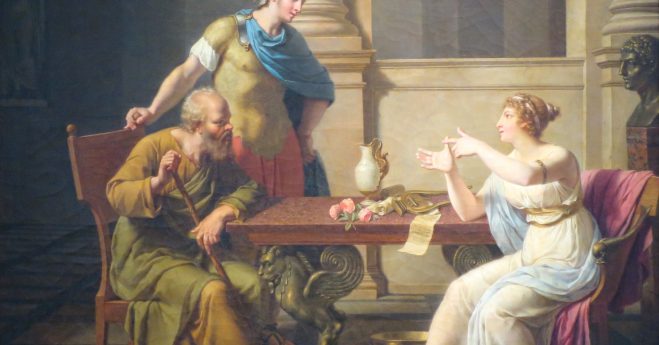 Let’s not talk about the issue. You know what I’m talking about—that theological, political, or social issue that causes your heart to accelerate the blood through your arteries faster and faster, because you need all the strength your body can muster to squash your opponent like a bug. It’s that issue where you’re right, and everyone on the other side is wrong, perhaps even evil. And maybe you are right, and maybe they are evil. If everyone would just stop and listen to you, the world would be a better place. But they don’t, and “that’s what’s wrong with the world!” I hesitate to give examples of what the issue might be, lest this become an article about the issue, and I don’t want to talk about the issue. Instead, let’s talk about how we talk about the issue.

As Christians we want the Ten Commandments to govern our behavior, including our thoughts, words, and deeds. That’s why Lutherans, ideally, make their children memorize the Ten Commandments and their meanings. So a gold star to anyone who can identify which commandment governs the way we talk about the issue.

That’s right; it’s the Eighth Commandment. Good job! “You shall not bear false witness against your neighbor” (Ex. 20:16; Deut. 5:20). But someone might ask, How does this apply to our debate? As long as I’m telling the truth, I can be as harsh as I want and still be within the limits of the Eighth Commandment, right? No; not exactly. The Ten Commandments are a complete summary of God’s Law, but they are not exhaustive of every little detail. Other parts of Scripture expand on the commandments so that we can see their full scope. For example, consider Colossians 4:6: “Let your speech always be gracious, seasoned with salt, so that you may know how you ought to answer each person.” Not only must our speech always be truthful, it must also be as gracious as possible. And we should note that this still applies whether we are talking directly to a person or behind their back. It applies whether we know the person personally or not. In all circumstances, we must put the most charitable construction on all that our neighbor does and says.

In his Small Catechism, Martin Luther does a masterful job bringing out the full scope of the commandments. Regarding the Eighth, he asks, “What does this mean?” Answer:

We should fear and love God so that we do not deceitfully lie about, betray, backbite, nor slander our neighbor, but defend him, speak well of him, and put the most charitable construction on all that he does.

Now, I’m going to go out on a limb here and say that, as a human race, we do a miserable job of this in the arena of public debate. If you spend any time on Facebook or YouTube, you’ve probably seen videos posted with a title like this: “(Person A) absolutely destroys (person B) on the issue of (fill in the blank).” Now why do we want to destroy our opponents? And why do we take pleasure watching our ideological heroes destroy people we disagree with? Nobody wins in this system. We’re not actually changing anyone’s mind. We’re just pandering to the people who already agree with us while alienating anyone with whom we disagree.

What if, instead of trying to destroy our opponents, we actually try to persuade them? Too often we misunderstand or misrepresent our opponents. We paint them in the harshest light because that’s the image that is easiest to destroy. Persuasion is much more difficult. Persuasion first involves listening so that we might actually understand where our opponents are coming from. And when we understand where they’re coming from, we might actually see some good intentions behind a position we disagree with. Persuasion also involves considering the merits of their argument. When we do this, we might actually allow ourselves to be persuaded, which is a good thing when the merits are good and true. And if we’re not persuaded, we will hopefully be able to identify the point where our opponent’s argument went off track. We’ll be able to see how they got from good intentions to a wrong conclusion. Then we can thoughtfully and graciously show them what’s wrong with their argument. That’s persuasion, and it’s the loving thing to do.

Obedience to the Eighth Commandment is not about silence. It’s not about avoiding controversial issues. Silence is only marginally better than destroying your opponent. If someone is deceived by a dangerous error, it is not kind to let them remain in it. It’s about speaking the truth in love. Thanks for listening. You may now return to your regularly scheduled talking about the issue.

P.S. For students of Law and Gospel, you might notice that this article is all Law. That’s okay; it’s an article, not a sermon. If you are convicted by your sins, know that Jesus has removed that sin. You can also go see your pastor for confession and absolution.

But for you who revere my name, the sun of righteousness will rise with healing in its rays. And you will go out and frolic like well-fed calves.
Malachi 4:2
DailyVerses.net